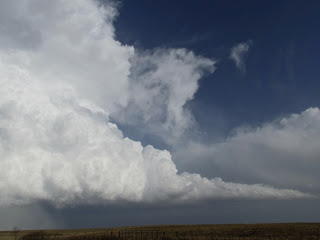 Well March 22nd, 2011 first chase of the year.  Wow, where to begin.  The weather models were showing a triple point moving across Nebraska / Iowa  on the 22nd. A storm in the afternoon started to fire up in North Central Kansas moving northeast.  Early in the day decided to head down a little early to Nebraska City and wait it out with my brother and some chaser friends from Omaha.  A temperature reading of 80 degrees being in a warm sector felt like a May chase day and it felt great that day! Two iPads running Radarscope were being tested on this day.  One iPad running on Verizon and the other iPad using AT&T. Well to make a long story short, surprisingly AT&T won with data in SE Nebraska / SW Iowa. Testing the 2 iPads out during the day waiting for storms to fire and while chasing, AT&T won surprisingly with data. Verizon phone wise is great but it looks like data could be another. Just opinion. Anyway after a quick “eat fresh” lunch, it was time to watch our storm come flying in at ranging  40-60 knots from Kansas.  60 knots!  Realizing the storm speed it was time to bust out the Iowa map and prepare to go east…Seeing some amazing storm structure come into Nebraska City it was time to head into Iowa where many “busts” have occurred in storm chasing over the past few years.  This time though there were multiple tornado warned cells in Southwest Iowa.  It was nice to see the chaser community out chasing down Mother Nature in Nebraska / Iowa.  This day proved to be challenging with storm speeds but all in all a successful one and a great backyard chase to get the rust off before spring really hits.
Posted by Mike at 2:52 PM